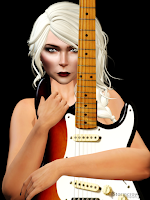 Music, sensuality made real. Feel the deep throbbing of a bass line deep in your bones. The smooth curving forms of the melody lift you into new levels of bliss. Music frees the mind and soul. For the musician it is passion: raw, primal, and pure orgasmic pleasure

Tara stumbled out of the back entrance and into the alley behind the Gravity Club. The night was cool and wet, rain throughout the evening hadn’t done much to wash away the grime of the alley nor the stench of rotting garbage coming from the dumpsters. Still, it was a mite better than the overcrowded club, which stank of the sweat of a couple hundred drunken and rowdy patrons and stale beer. She collapsed back against the wet brick of the building and fished a pack of smokes from her pocket. It had been a good set, though, she thought to herself as she lit up a cigarette and let the smoke burn against the back of her throat. 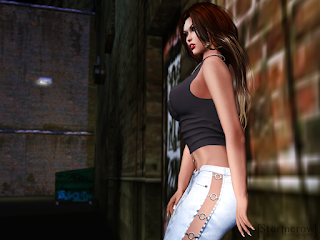 The band had been in top form tonight. They’d hit every song hard and with perfect timing. The crowd had responded well and had only gotten better as the night had worn on and the levels of intoxication had risen. The new set list had really worked out well, ramping up the energy through the last set, sending people into ecstatic dancing, grinding, and moshing.

Yeah, it’d been a good night. Tara took a long drag off of the cig and leaned into wall. She smiled to herself, a good set, a good show, was practically orgasmic for her. Her body nearly shook with the energy of the event. Which was why she’d escaped the muggy confines of the club. She needed those few moments to herself to let the pleasure infuse her body. 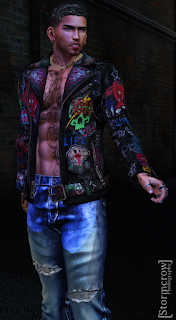 The door to the club slammed open, disturbing her revere. Out stormed Dominic, the band’s bassist. Storming was the right term, she thought. She could practically see the thunderheads forming over his head as he strode into the center of the alley. Dom was a hell of a good musician, pushing her own skills to be better all the time, and a very good lover, again, pushing her own skills to match. But that combination came with a temperamental nature and it something had gotten under his skin.
“What the fuck, Tara,” Dom growled as he rounded on her. “What the fuck was that all about?”
Tara looked at him in confusion for a moment. She shook her head and took a drag off the cig trying to figure out what had happened to get him all riled up.
He looked at her with bemused, simmering anger, then shook his own head, “She was practically fucking you on stage,” he finally revealed.
The light dawned in her eyes and she nearly laughed out loud. The little coed that’d rushed up on stage had been very friendly, and very hands on. The girl had been fairly drunk and ground up against Tara’s backside, running her hands down to Tara’s crotch and dry humping her on stage while Tara had ripped out the licks during Spoonman. Tara wasn’t one to let inhibition get in her way when she was on stage and feeling the energy of the music and the audience. The wild roars of the club-goers entertained by a bit of sex just added to the intense power she felt on stage.
“Aw, c’mon, Dom, she was just some coed having a good time.”
“Yeah? What if she’d had some guy there that didn’t like having his girl makin’ it with the band?”
She gave him an incredulous look. “You can’t be serious,” she shot back at him, her own burr of irritation now starting to dig at her. He had barged in on her afterglow with this bullshit? “You cant honestly believe that!”
“I was watching you. I was watching the crowd. I saw those guys out there,” Dom broke off, looking suddenly very uncomfortable.
“This isn’t about them, is it,” she nearly laughed, but had the grace to reign it in. She glared at him through narrowed eyes, “This is about you. You’re jealous!”
He turned and got right in her face. He towered over her, tension making the muscles in his shoulders shiver as he thrust both arms to either side of her, slapping his hands on the gritty brick. His face a mixture of fighting anger and little boy pleading, “Yeah, so what if I am,” he growled. 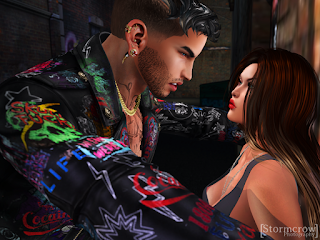 Tara had no worries about Dom’s anger. For all his bluster and growling he was always aware of himself on a physical level. He’d posture but never intentionally hurt her. They’d quarreled often enough as lovers and musicians that she held no fear of him.
Damned men and their egos and their attachments, she thought. She never should have gotten intimate with a band mate. On the surface he’d always nodded and gone along with Tara’s onstage sensual persona, but it was obvious that, for him, this had been building for a long time now. And that just turned the heat up on Tara’s own anger.
She pushed him, then punched her fists against his shoulders. She pushed hard against him and began to scream, wordless and animal screams of frustration. “Goddamned you, mother fucker! What right do you have to be jealous? I never ever promised you a goddamned thing!” she finally managed, forcing him back on his heels. She continued pushing against him, forcing him back until he was pressed against the wall opposite. 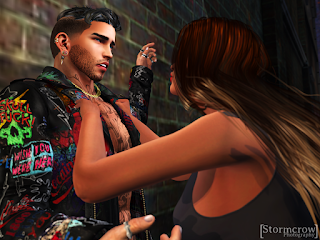 She grabbed the front of his jacket and yanked him back down to her level. Her passions were up again, they roiled, anger and desire all mixed up in a heated mess. Tara locked her lips on his, drawing a startled sound from him. She kissed him hard, biting his lip. He cursed into the kiss, pushing against her at first, then grabbing her by the back of her neck, lifting her into him as she tongue-fucked his mouth. 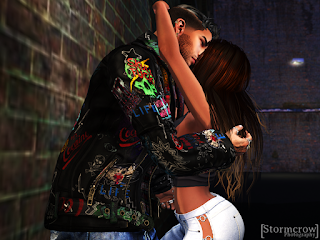 Finally she broke the kiss off, leaving him panting and a bit stunned. She could taste his blood on her lips and he’d have a hell of a love bite on his lip to show off. She grabbed his jeans, nearly ripping them apart as she tugged at the button and worked the zipper. Dom half-heatedly batted at her hands, not wanting to hurt her and still back on his heels at her reactions. The look she shot up at him as she loosed his member and grabbed hold of him was not one of affection. She held his look as her hand worked the shaft of his quickly hardening cock. He hadn’t expected this reaction from her and he breathed in a ragged gasp as he pushed his hand against her shoulder.
Tara wasn’t to be deterred at this point though. She leaned into him, working his cock with long, slow, hard strokes, fucking him unforgivingly with her hand. She grabbed the front of his jacket again, pushing her fist into his chest and thrust her chin at him, daring him at that point to do something. When all he could manage was a gurgle of mixed pleasure and muted anger she shoved one last time and lowered herself into a crouch. His gaze followed her down and he let out another muted groan. 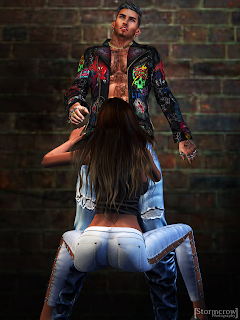 She looked up at him from his throbbing member in one last challenge, the pad of her thumb pushing indelicately against the base of his cock head. His eyes closed as his tried to shift away, but was trapped with her knees to either side of him. Resigned, his body sagged back. 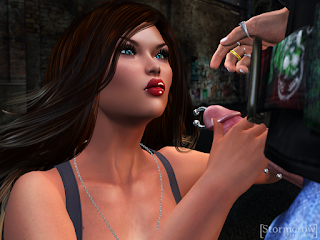 Tara looked back to the now fully engorged meat in her hand. Her hand wrapped his shaft in a tight grip, working it still. She leaned in and dribbled spit over the head, her hand slipping over the soft helmet and spreading the sticky, wet over the sensitive tissue, eliciting another groan from above. 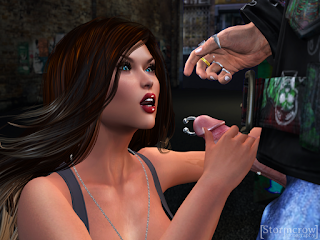 With a last glance up at Dom’s now glassy eyes, she opened her mouth and slipped the head between her lips, watching as he melted away when her tongue dragged, rough and wet, over that sensitive little fold on the underside. With her own growl she pushed forward and, stretching her jaw wide, seemed to swallow him whole. Dom smacked his head back against the grimy brick of the wall and his hand went to the back of her head, instinct taking hold of him. He pulled her to him, his hips bucking as he felt her throat contract around his cock and then the slow, torturous slide as she pulled back.
Tara pushed deep onto Dom, his sex filling her mouth, then throat. She held him just long enough for her throat to contract around the pulsing member and pulled him out just as her gag reflex rebelled. Each dive was a slow pleasurable torture, even though his hand on her hair urged her to go faster, she fucked his cock deliberately, slow, hard, with long deep strokes. She felt the meat pulse and throb between her lips and pressed her tongue against the underside and swirled the tip of his head with each pass, growling each time she swallowed him down. 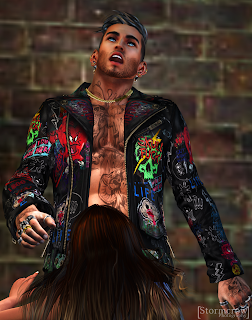 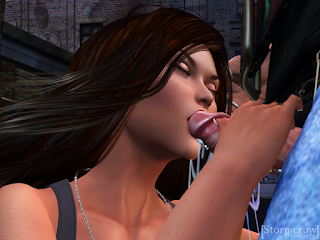 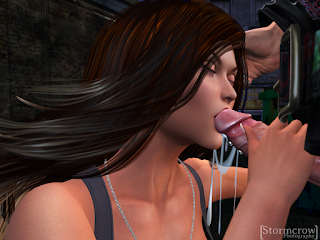 Tara, felt the oncoming orgasm and latched onto him like a lamprey. His cum filled her mouth and she swallowed fast, the salty taste of him running down her throat as a small dribble of drool and cum ran down her chin. She succeeded in swallowing the majority of his seed though and held onto him, milking his shaft with her hand as she waited through his orgasm.
She finally released him and sat back on her heels before teetering over against the wall next to him and settled he ass on the damp concrete. She propped her arms up on her knees and wiped the drool from her chin with the back of her arm. The whole thing left her unsatisfied and simmering with anger and frustrated pleasure.
Dom managed to recover himself after a moment and fumbled his bobbing cock back into his jeans. He pushed himself away from the wall and stumbled back toward the club. At the door he half turned but did not look directly at Tara.
“I’m done Tara. I can’t use sex like some goddamned weapon. So, I’m done. With you and with the band,” He gave a resigned grimace and pulled the door open.
Tara, looked up at him, her anger quenched by the sudden announcement. Now stunned herself, she watched Dom disappear into the club. It wasn’t until the door had shut with a bang that her mind moved past the surprise and she sagged back against the brick, smacking her head into the grit.
“Fuck,” she muttered as she sat there, the damp chill seeping up through her butt, and wondered where she was going to get another bassist.
Posted by Unknown at 7:25 PM